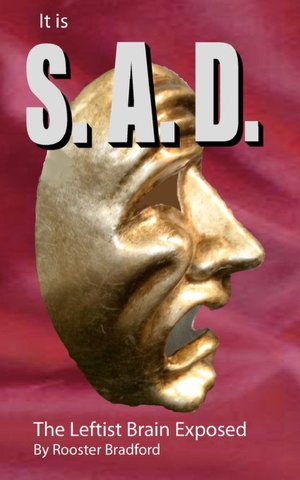 “A reader (or listener) is never confused by Rooster Bradford, as he
makes his positions known plainly and clearly early and often. His
mellow voice mesmerizes radio audiences weekly, and now, with “It
Is S.A.D.”,former prosecutor Rooster lets his fans and his
detractors have it right between the pages.”
– Jim Buckley, Publisher of the Montecito Journal, Montecito, California.
“Move over Rush! Take note Glen Beck! Talk radio host Rooster
Bradford has written a book that proposes to include “social
autistic dysfunction” in the lexicon of pathological states. ” It Is
S.A.D.” is a provocative read for anyone who seeks to understand
the cerebral differences between the left and the right.”
Les Carroll General Manager of KZSB 1290AM Radio, Santa
Barbara, California

The book can be purchased by contacting Rooster at rooster@west.net, or  Amazon.com.

The history book which details the events of Islam’s declaration of war and battles to fulfill its own prophecy.

Rooster Bradford , author, welcomes your interest. The book will be available soon. It is in it’s final editorial review. Once announced you can obtain a copy via PayPal. Your purchase will be autographed and dated.