All rights to the article are released, Use it freely.

RoosterBradford is a former lawyer, politician and radio show host of “The Rooster Crows”   He is the author of several books and articles.  You can obtain his most recent book,  “It is S.A.D.” from  Amazon-Kindle.    His web page, is “The Rooster crows.net. “

More and more,  in ways most of you do not see,  today’s Democrats,  not only lie and misrepresent their true socialistic goals,  they are using the middle  finger in a clenched fist to tell you how they really feel.  Their confidence is clear.

The Rooster does not lie.  You must believe the danger Constitutionalist are facing. President Obama must not win.  He and his false faced comrades must be turned out.  It is our last peaceful opportunity.   Now what is the point?  Glad you asked.

Democrats, everywhere are showing their disregard for whatAmericahas been and should always be.    For Example a few days ago, inLake County,Floridathe Democrat Party Headquarters flew an American Flag.   What they had done was replace the Stars, (which represent our States and our Unity), with a facial picture of their Leader, Barry Obama.  Now this violates Federal Law regarding the flag and desecrates our National symbol.  Their war against the pledge is just a part of this effort.  The Democrats had to know this violated the flag,  or be idiots.  Your choice. A veterans association marched on the building and demanded it be taken down.  The head of the Democrat party, at that Headquarters, a  female, took it down only because the Veterans would not leave and the pressure of prosecution

All Right now the flag bit is just an example of the unpatriotic things that are happening daily.    The one that has set the Rooster off, and sent his retired Navy  feathers flying  is the big middle finger they gave us at the DNC  convention (Democrat National Committee),  Maybe you did not see it and maybe you did.  Even if you were watching, you probably would not have recognized the insult.

Here is the worst, in your face, bit of disregard for your Republic and your Constitution ever displayed by the Democrats.   Here is the picture of their true treachery.  Here is their telling you, in pictures, who they really are.  Pay attention to  details, please.

At that Convention, on the last night, when many of you had turned it off, one Retired Admiral , John Nathman,  came to the platform, center stage, to extol the virtues of American Veterans.   (Many of the military top brass are fuzzy headed leftists.).  As with most of the speakers a giant screen behind him showed pictures of various scenes, designed to enhance the speech.  Behind this Admiral the DNC showed large war ships in some type of maneuver.

Those war ships, displayed by the DNC. were(Soviet), Russian ships.  Not ours. There is no doubt.   Attached are the pictures which tell the sordid tale.  Expert Norman Polmar confirms it and in one of the pictures the ship was in fact flying the
Russian Naval  ensign, a Blue Cross on a White Field.  In fact experts have been able to identify the names of the ships.  The Kara Class Cruiser “Kerch” and the Kashin Class Destroyer, “Smetlivy”, More than that the ships were part of the Russian Black Sea Fleet. This did not happen by mistake.  Where ever they went to get the pictures the source   had to be labeled Russian.   With out doubt they put these pictures up to say to you “F___ Y__ America”.  If you feel you are an American, then they were saying this to you.  If you still feel like giving them a break, then rethink why Obama, off mike, told the Russian President that he could not do what was requested, but after his reelection he would have more flexibility.  That Flexibility is your way of life.

Rooster Bradford, gives up all rights to this article and seeks no compensation for its use.

Pictures can also be obtained from The Rooster crows.net

These are the photographs that prove that the DNC used Russian ships as aback drop during the convention. 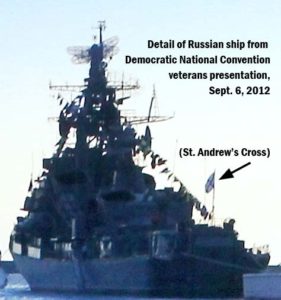 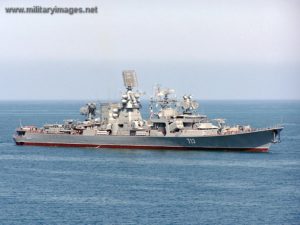 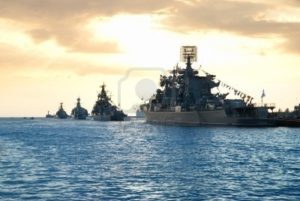 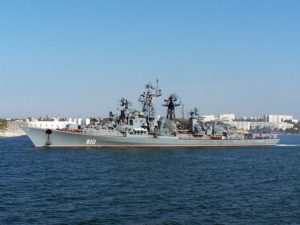 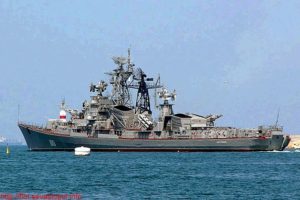